In my previous post I have explained how I was able to connect from windows containers running on docker to a SQL Server cluster on a network using domain authentication (with gMSAs) rather than SA logins and passwords.

After I got the containers using Group Managed Service Accounts working on a single Docker host I went on to try the same in the swarm mode. My plan was to simply replace docker run -d part of the command creating the container with docker service create, but it turns out that it is not that simple, especially if you don’t have a lot of experience with swarm mode. It is also worth noting, that I had a lower success rate than when I was experimenting with standalone containers. I was able to make it work on all the same Windows versions (2016, 1803, 2019, 1809) but only when using Docker 18.09 and not on the 17.06 which was on the image I used for 1803 tests).

Similarily to the previous post I have tested this on a range of operating systems and docker versions, but what I want to show here is how it worked on Windows 2019 and Docker 18.09.

To make it a bit more exciting (and because of how Docker Swarm works) this time I will be testing the service from a web browser. To start with it does’t work. That is because there is no service listening on port 8101. 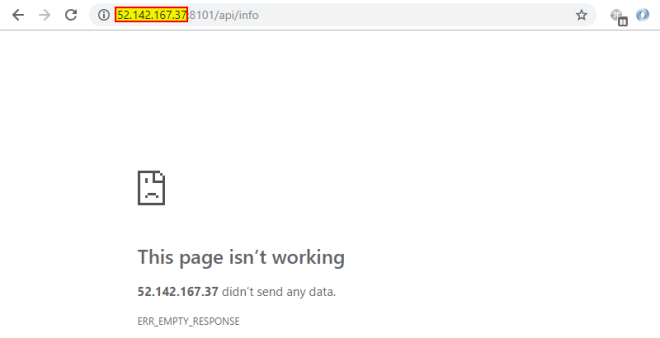 To create a service docker service create command is used. When compared to docker create some parameters are different, for example there is no --security-opt used in the previous post and instead --credential-spec is used. But first things first. Let’s just create a service using michalporeba/sqlgmsatest:1809nano image with minimal configuration and see what happens.

The -p 8101:80 makes the service available on the 8101 port using the default ingress network. No errors, the service is running, it is converged, so let’s try to connect to it! 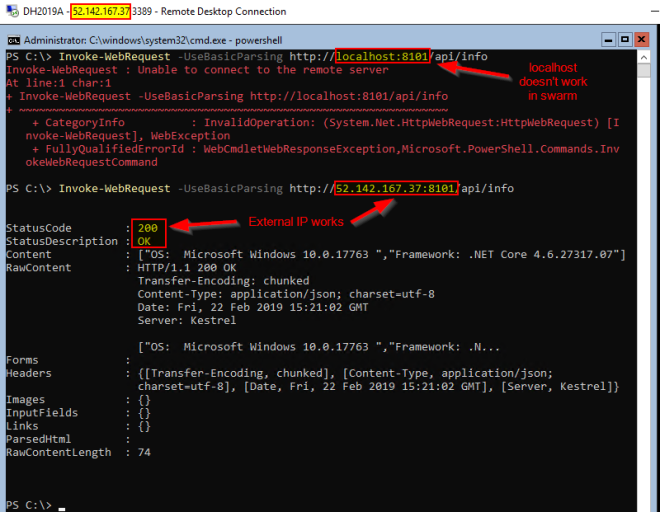 And here is the first surprise. The localhost doesn’t work. That’s a swarm thing and although it is possible to publish ports in host mode it is not how I would be running in production, so I will just open the ports and connect to the service externally using a web browser.

OK, so the api/info call was successful. The service from michalporeba/sqlgmsatest:1809nano image is running and responding. So the next task is to use it to query theTestDBdatabase on my test instanceDB.sqlgmsa.local`.

Not authorized! But who? The NT AUTHORITY\ANONYMOUS LOGON. That is because despite the docker host being member of the sqlgmsa.local domain, the container running the service is not. To fix it, exactly as in the case of standalone container a Group Managed Service Account has to be created, installed and a credential file created.

Consistency is everything, isn’t it? -Name, -Identity, -AccountName on those commands above refer to the same thing, the gMSA name and have to match. The -Name parameter on the New-CredentialSpec command is used to control the name of the json file containing the credential spec. The filename can be anything, and it doesn’t need to match the account name, but I find it easier if it does. The existing credential spec files can be found in C:\ProgramData\docker\CredentialSpecs\ or by using Get-CredentialSpec command from the CredentialSpec.psm1 module.

The next step is to use the newly created credential spec file when creating the service. The --security-opt is not supported when created a service and --credential-spec has to be used instead.

The new service now runs on port 8102 and should use the new MyService identity. Let’s see.

Almost there! Login failed for user SQLGMSA\MyService$ That’s good, that means the correct identity has been picked up, so the last thing to do is to create the login on the SQL Server.

And now, as if by magic

What is your opinion? Cancel reply